The Importance of Memorials 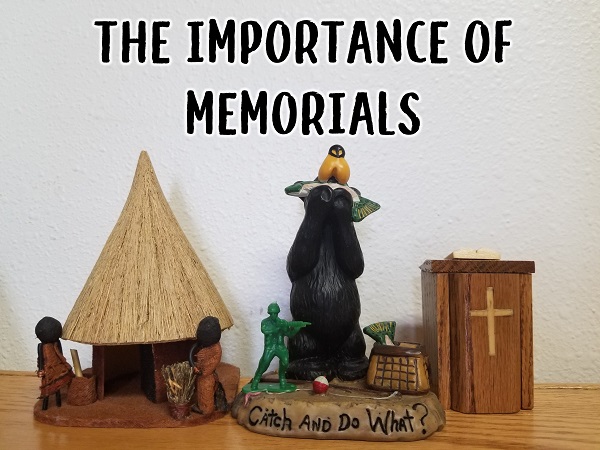 What does Memorial Day mean to you? For a lot of people in this country it means an extra day off making for a three-day weekend. Memorial Day weekend is synonymous with the first summer trips of each year, since the schools are usually just dismissed and everyone in the family is ready for a break. How did you spend your Memorial Day? Were you among those who enjoyed the day off or were you working for one of those businesses that require at least some employees still show up for work? A 2015 poll showed that more than 40% of businesses will still have employees working in some way on Memorial Day (https://www.businessnewsdaily.com/8000-working-memorial-day.html). So while it is safe to say that a majority of American have the day off, it is barely so.

But back to the original question, what does Memorial Day mean to you? The origins and purpose of Memorial Day can be traced back to 1868 with the 30th of May being declared as “Decoration Day” by General John A. Logan who said,

“The 30th of May, 1868, is designated for the purpose of strewing with flowers, or otherwise decorating the graves of comrades who died in defense of their country during the late rebellion, and whose bodies now lie in almost every city, village and hamlet churchyard in the land.”
General John A. Logan

Originally Decoration Day, which later became known as Memorial Day, was meant to remember the fallen soldiers of the Civil War. It wasn’t until after the World War I that it was meant to honor all service men and women who lost their lives in the line of duty. And it wasn’t until 1971 that it became a federal holiday which was also when it was moved to the last Monday of May to always provide a three-day weekend for federal workers.

The premise of Memorial Day is good and is important for the future of our society and culture to remember. However, I would like to ask now, what memorials you personally have in your life to remind you of important things or individuals? Memorials are important and provide us with a physical thing to look at in order to link us to important people, places and events of our past. I personally have three memorials sitting on my desk right now. Wander with me as I discuss each one.

First, I have a little African hut that was given to my wife and I by a former missionary in South Sudan. Under it there is a label that reads, “By: Buwembo Yekosafati” (trying saying that ten times fast, or perhaps even just once fast is enough). I don’t just keep this on my desk because I find it interesting but because it acts as a memorial to remind me of the missionaries we support at Snyder Bible Church. Its purpose is to remind me to pray for each of our missionaries as often as I see it, which is almost daily.

Second, I have a statue of a bear holding a fish in its mouth with the question “Catch and do what?” under it. My wife bought this as a gift for me years ago, but it has become a memorial for me as well. For in that question, “Catch and do what?” I am reminded every time I sit down to prepare a sermon, Bible study, devotional, blog post, counseling session or any other thing of two important truths I need to keep in mind. One, ministry in any form is never about building an empire. That is, a place where I or anyone else fishes for men and then adds them to their trophy case. Two, ministry is all about preparing people to be disciples who make disciples. Not ones who remain in the comfortable pond of Snyder Bible Church but ones who are trained and released into the wild to reach others for the Lord.

Third, there stands a little army man between the African hut and the bear. This is my latest addition, finding its place here only a few months ago. It was given to me by a brother in Christ as a reminder to pray for him as he is deployed to the Middle East as a chaplain.

Memorials are not associated with just one culture or society but are within the very heart of mankind. There is not a place you can go in the world where you will not find a memorial to something, whether it be for a loved one, a believed in deity, a significant place, person or event from history. There are memorials around us every day and we would do well to take advantage of our human tendency and use it for our good.

Throughout Scripture we read of many different memorials which were established for many different reasons. Wander back to just one of these memorials with me. We pick up the story in 1 Samuel 7. Take a moment to read this chapter then come back when you are done. Did you read it? Good! In this chapter we read of how God delivered Israel from the Philistines without the Israelites even having to lift a sword. I absolutely love how Samuel responds to this attack. He doesn’t organize the people for battle or any such thing. He simply offers a sacrifice and then prays. And best of all verse 9 ends with “and the LORD answered him.” That was enough!

Everyone on that day knew where the victory had come from. There was not one of them there that could doubt that God had won this battle. This was a significant victory in a very troubling time in Israel’s history and so Samuel establishes a memorial to remember that day. He took a stone (which was a common way to mark special locations in Israel [Genesis 28:18; 31:45, 46; Joshua 4]) and set it up for everyone to see naming it “Ebenezer” which means “the stone of help”. Samuel also declared that day “Thus far the LORD has helped us” (1 Samuel 7:12).  What a wonderful name and reminder Ebenezer is! It was a memorial to the saving action of the Lord that day but in it Samuel also reminded Israel that God had always been faithful in helping them. God had always been true to His word and had always been there for Israel when they sought Him. That fact is worthy of a memorial and not just in Israel but also in our own lives.

What memorials do you have set up in your life to remember important people and events? Do you have any that remind you of the Lord? Of who He is? Of what He has done for you in the past? Of what He is calling you too in the present as well as in the future? If so, I would encourage you to make sure your memorial is in a place where it can be recognized daily. If you don’t have any such memorial I would encourage you to find one. For they are beneficial not just for us but also for those who come after us, who need to know about the faithfulness of God in the past.