The Wandering Pulpit – Give Me Chicken Nuggets Or Give Me Death! 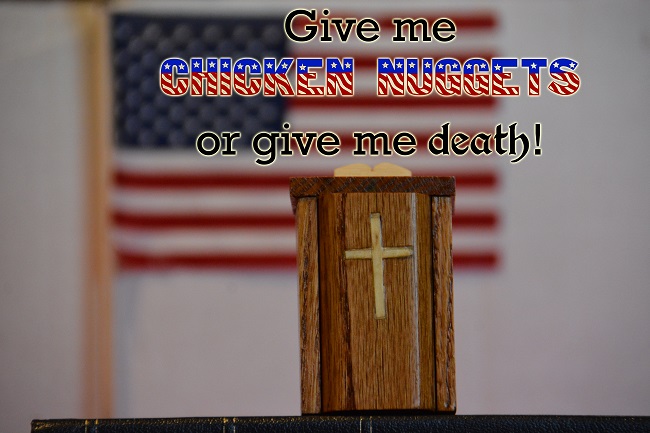 Have you ever heard about “Meatless Mondays”? From what I understand it means that on Mondays you forgo eating any kind of meat whatsoever. I also understand that some have undertaken this diet because it is believed it will help protect the environment and slow down climate change. If that makes you feel better while eating your salad go right ahead, and I truly say that with all sincerity (really I do). I personally just recently heard of this “Meatless Monday” thing from a news article about how the Mayor of New York City, Bill De Blasio signed an order which instructed all public schools in the city to observe the “Meatless Monday” doctrine this coming school year. (Open sarcasm font) Monday’s are often bad enough without taking away a child’s chicken nuggets! (Close sarcasm font) If someone wants to do this out of personal conviction or ideology I am not here to stop them, that is their right, knock yourself out with broccoli. I, however, do have a problem when someone else wants to force me to jump on board and put down my cheeseburger every Monday. Really when it comes down to it the “Meatless Monday” thing is not that big of a deal. What is a big deal is when the mayor of any city in America has taken actions which restrict the personal choices of over a million school children. But let’s be honest, this kind of stuff happens every day all over the country. There seems to be a regulation for everything from where you need to place your nails when you build a home to what you need to do with the rain water that falls on your property. Now before we wander too far off track let’s slow down a moment and say this, a certain amount of regulation is good and proper for the government, a matter of fact God has given government some power in that area (Romans 13:3-4). The question is where do you draw that line where governments influence ends?  This is a much deeper question than what we have time for here. If you are interested though, in this topic I encourage you to attend our upcoming Sunday evening study called “Foundations of Freedom” where we will be covering topics like this in light of Scripture.

Right now though, lets cover a simple fact about government. And that fact is, the more power you give it the more it will take from you. Take a moment to read 1 Samuel 8:10-18 and to consider Samuel’s warning to Israel about wanting an earthly king to rule over them as opposed to operating as God had ordained through the Law at Mount Sinai.

Did you read it? How many times did you read the word “take” in these verses? Did you find them all? The word “take” is used six times in these few verses and every single time it is in regards to the king taking from the people for his own personal gain. Also did you notice what the king will betaking, “your sons”, “your daughters”, “the best of your fields and your vineyards”, “a tenth of your seed and of your vineyards”, “your male and your female servants and your best young men and your donkeys”, “a tenth of your flocks,” “and you yourselves will become his servants”. When all is said and done in this passage Samuel warned that when you give a human being/government this much power over you they will take from every area of your life including your personal property, the fruits of your own labor, your ability to do business, and even your own life will no longer be your own. Each of these things which would be taken by a king were things which God Himself had given to Israel to enjoy. Take a moment to read over this passage again and consider what each of these areas of taking would actually mean for a family in Israel at the time.

Notice as well that the word “give” is used twice here in this passage but both times it is not in regards to the king/government giving back to the people but rather instead the king/government giving to “his officers and to his servants”. In other words, he will take from the people what is there God given possessions and either keep them for himself or give them to those whom have his favor. Corruption has always been a problem in human government and it always will. It simply comes with having sinful individuals in positions of authority. Since we are not able to limit the corruptive power of sin on another, the best way we can combat corruption is by limiting the authority or power which an individual or group possess.

When all is said and done what we can pull from 1 Samuel 8:10-18 is that government does not give to the people but takes from the people. God gave Israel a choice as to what kind of government they wanted and they chose a monarchy because they desired to be like their neighbors and have a king to “go out before us and fight our battles” (1 Samuel 8:19-20). Yes, their new king would go out and fight their battles for them but with their sons leading the charge and their crops in their bellies and their taxes paying for their weapons and armor and so in the end they did still end up fighting their own battles. They exchanged a greater God given freedom for convenience because they were motivated by laziness and fear. The same has happened countless times throughout the ages from empire size scales to small town churches and organizations. And our own nation now walks that same path moving the line of government authority further away from personal freedom to personal regulation. Government must regulate, it is its God given purpose but where that regulatory line is drawn is what is truly important and in this nation we get to choose where it begins and ends!

However, we the people, can become just as corrupt as any politician and so we must also regulate our own power and authority lest we misplace that regulatory line. So where then do we limit ourselves? For to limit ourselves is to give greater power to another. No one man or woman, or any group made up thereof can be trusted with this power and so therefore we must look beyond ourselves. We must look to our Creator, who has established this universe in perfect balance and has given to us every freedom we are able to enjoy while we tread this guilty sod. This means that we take His standards and make them our own. His line becomes our line realizing we do not have the authority to move it even a hair. Scripture must be our regulatory line and where Scripture is ambiguous we must faithfully adapt and apply its principals. This is true not just for nations but also families and individuals. Take the time to keep up with and be involved in the affairs of our government and continually commit our country to the Lord in prayer so that we might be able to “secure the Blessings of Liberty to ourselves and our Posterity” and “so that we may lead a tranquil and quiet life in all godliness and dignity” (1 Timothy 2:2).