The Wandering Pulpit – Interesting Places Of The Bible – Mahanaim 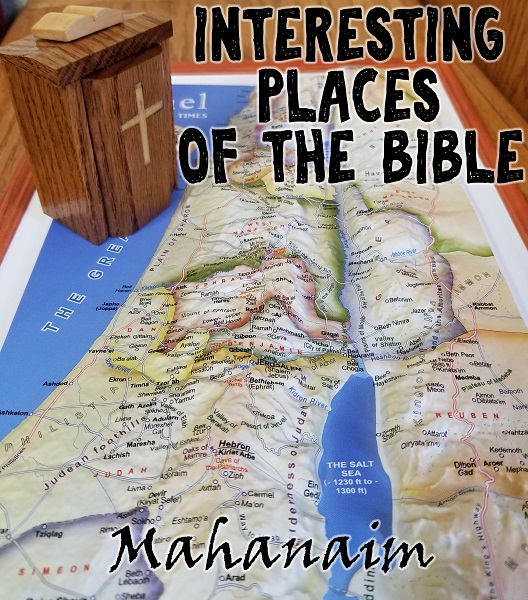 One of my favorite things  about the Scriptures is the fact that we are able to look back through history and read about real events, which happened to real people in real places. As a kid I always enjoyed the Indiana Jones movies and the idea of being such an“archaeologist” and digging up great treasures of the past. When I later found out that being a real archaeologist is not nearly as exciting as it was for old Mr. Jones you could say it was a bit of a letdown. But I still do enjoy learning about new places, their history, their significance and who helped to make them so. With that said, from time to time this pulpit will be wandering back in time into the land of the Bible to examine interesting location’s and what makes them unique. Today, we will dig up an ancient city which most readers of the Bible probably don’t remember much about but is a place full of history and significance. Today we wander back to Mahanaim.

This settlement was located east of the Jordan River in Gilead on the border between the land allotted to Gad and East Manasseh (Joshua 13:26, 30). Mahanaim itself was actually given to the tribe of Levi (Joshua 21:38; 1 Chronicles 6:80), the priestly tribe, who did not receive a portion of the promise land but instead cities throughout it, that they might serve the Lord amongst the rest of the nation of Israel. The exact location of this ancient city is debated amongst scholars with little archaeological work being done in the area to confirm its location. However, there appears to be evidence which leads us to a probable location as The Baker Bible Dictionary points out,

“Biblical references point to a location somewhere along the Jabbok River in central Gilead. Outside of this,the city could have been located virtually anywhere. It was earlier identified with Khirbat al-Makhna, 2½ miles north of Aijalon. Most recent attention, however, has moved to the twin hills of Tulul al-Dhahab on the Jabbok. Aharoni suggests that the western mound of Tulul al-Dhahab is Mahanaim and the eastern mound is Penuel.”

If you desire to know more about this location and see pictures of this suggested site, I would encourage you to visit https://www.bibleplaces.com/jabbok/. This is a wonderful resource for basic Biblical archaeology and taking your Bible studies to a new level.

Though Mahanaim’s location is still somewhat unknown Scripture provides us with a wonderful history of the city, which appears to begin rather humbly but then grows into something much greater than was first expected. This city’s first mention comes to us in Genesis 32. Allow me to lay out some of the context for you. In Genesis 28, Jacob fled from his brother Esau, who planned on killing him because he had taken away his blessing from their father Isaac, through deceit I might add. Which, to no one’s surprise, made Esau a bit hot under the collar.  Because of this Jacob was told by his mother to flee to Haran where his uncle Laban lived. He remained in Haran for about twenty years, during which time he took two wives (never a good idea) and through them as well as their maids (also never a good idea) had 11 children (Genesis 29-30). He left Haran with great herds of livestock as well as wealth. After making peace with his uncle/father-in-law (awkward), who didn’t like the way Jacob left, nor seeing him go in the first place (Genesis 31) we come to Genesis 32 where we find Jacob at Mahanaim.

“Now as Jacob went on his way, the angels of God met him. Jacob said when he saw them, ‘This is God’s camp.’ So he named that place Mahanaim.”
Genesis 32:1-2

Mahanaim means, “two camps” or “two companies”. Jacob named the place such because he was met there by “the angels of God”. When Jacob first left the Promise Land he saw the angels of God as well (Genesis 28:10-22) and now as he returns he again is reminded that the Lord is with him. What a comfort this must have been for Jacob, he just escaped the danger of his uncle/father-in-law (still awkward) and before him still lies the fear of his brother Esau who desired to kill him when he left the land. Yet Jacob was able to name this place Mahanaim because he had been shown God’s presence with him there. However, it appears that Jacob’s fears got the better of his faith and made him forget the wonderful name of that place and instead forever twist its glorious title.

“Then Jacob sent messengers before him to his brother Esau in the land of Seir, the country of Edom. He also commanded them saying, ‘Thus you shall say to my lord Esau: ‘Thus says your servant Jacob, ‘I have sojourned with Laban, and stayed until now; I have oxen and donkeys and flocks and male and female servants; and I have sent to tell my lord, that I may find favor in your sight.’’’ The messengers returned to Jacob, saying, ‘We came to your brother Esau, and furthermore he is coming to meet you, and four hundred men are with him.’ Then Jacob was greatly afraid and distressed; and he divided the people who were with him, and the flocks and the herds and the camels, into two companies; for he said, ‘If Esau comes to the one company and attacks it, then the company which is left will escape.’”
Genesis 32:3-8

Mahanaim was named such because Jacob saw God’s camp there but now it is called such because it was the place where Jacob in his fear divided all of his possessions so he might only lose half of it rather than all of it. Mahanaim is still the right name for the place but now it is not in regards to God but to men. How sad it is that this place so quickly had its name tarnished by a lack of faith. Unfortunately, Mahanaim continued to be remembered and used for its secondary purpose rather than its first.

At the time of King Saul’s death, Abner, Saul’s military commander (who was also his cousin) took Saul’s son Ish-bosheth and set him up as king of Israel. However, this was not pleasing to the Lord for everyone in Israel knew God had chosen David to be king in place of Saul’s line. David was made king over Judah while Abner made Ish-bosheth king over the rest of Israel. David ruled from Hebron (2 Samuel 2:1-4). And have you guessed yet where Ish-bosheth had his throne established? That’s right, Mahanaim (2 Samuel 2:8-9)! In clear and open rejection of God’s will Israel accepted a false king who ruled from the city known as “two camps”. Because of this choice the united kingdom of Israel was divided into two camps as a civil war came upon the descendants of Jacob for seven and a half years (2 Samuel 2:11; 3:1), ending with the murder of both Abner (2 Samuel 3:26-27) and Ish-bosheth (2 Samuel 4:5-7).

This again would be seen later in David’s life as he was forced to flee from his son Absalom, who led a rebellion against him (2 Samuel 15). Where did this fleeing man of God go? You guessed it Mahanaim (2 Samuel 18:24)!  Again the city was the place where the people of Israel were divided into “two camps”. Yet I can’t help but wonder if David was able to take some comfort there remembering the original meaning of that place. It was named Mahanaim because there it was demonstrated to Jacob he did not have to be afraid of those he thought to be his enemies, for the Lord camped with him, in unity. It was only through fear and sinful choices that its name had been used in a divided sense. For Israel, following Absalom, Mahanaim represented a split Israel just as it had for Jacob and Ish-bosheth but perhaps for David it meant not division but unity with the God who would deliver him from all of his enemies just as it was supposed to be understood when Jacob first named it Mahanaim.

How about you? How is your Mahanaim understood? Is your camp (life) united with God? Or is it divided because of fear or because of some selfish ambition or other sin? God desires to walk with us through this life, to share this earthly camp with us. But when we choose our own ways over His or allow our fears to keep us from a life of faith we will find ourselves in the divided camp of Mahanaim rather than the united camp of Mahanaim where there is peace which is beyond our comprehension (Philippians 4:6-7). Do not waste another moment in the divided camp but take some time now to reflect upon what areas of your life might be motivated by fear or sin leading to a skewing of God’s intent for your personal Mahanaim and then cast them before the feet of Christ knowing His ways are better than our own (Isaiah 55:8-9).