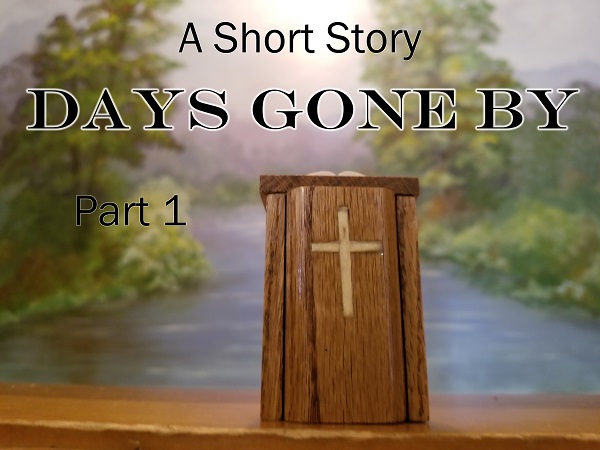 For the next couple of weeks instead of wandering down a bunny trail you could say we are “going down the rabbit hole” with a short story entitled Days Gone By.  This tale is meant to convey some important truths and so I encourage you to pay attention and to draw the conclusions the story leads you to on your own.

“Welcome to Days Gone By, if you would please follow me.”  So she did, as she had always done when visiting the facility and as always the attendant led her down the hall into one of the first rooms.  She sat down on the only chair in the center of the empty white room.  After she was situated, the attendant left the room closing the door behind him.  There the woman sat alone, never breaking eye contact with the blank wall in front of her.  After a moment, the wall suddenly came to life completely filled from corner to corner with an image of an elderly man and woman having breakfast together in their kitchen.  The man buttered his toast, while the woman sipped from a steaming cup with a tea bag string dangling from it.  They appeared to be talking but no words were heard.  However, the room filled with the smell of fresh toast and tea while the lighting of the room adapted to match the sunrise shining through the windows of the viewed scene.  The woman sat motionless gazing into the face of the man who got more crumbs stuck in his gray beard with every bite.  Not a word was said or heard but if you watched closely, the woman’s face slightly showed her inward struggle between joy and grief.  How long this went on no one can say for time has no meaning in this room but eventually, the silence was broken by a phones ring.  The wall went blank and the room returned to its original state.  The woman quickly got up and left the room.

“Welcome to Days Gone By, if you would please follow me.”  She did, and soon she sat again alone on the chair in the center of the blank room.  After a moment, the wall came to life again this time with the image of a man climbing high up into a tree.  At the base of the tree stood a woman with one arm around a young girl, who cried up “Be careful daddy”.  The man replied, “Don’t worry sweetheart”.  As he reached far out on a limb grabbing a kitten.  The woman watched as the man climbed carefully down the tree with one arm, gently holding the kitten with the other.  When he reached the bottom, the little girl began to jump up and down saying over and over again, “Yay Daddy!”  He knelt down and held the kitten out to her, and looking straight into her eyes he said, “I told you didn’t have to worry.”  The scene stopped and focused in on the man’s eyes, brown and deep reflecting the face of their little girl.  The picture remained and time passed, but not in the room, until something on the woman’s lap moved and purred.  So she again got up and left the room.

“Welcome to Days Gone By, if you would please follow me.”  She did, maybe it was her anticipation to get back to her room but she felt like the walk was a little longer this time but no matter in Day’s Gone By her old slender legs did just fine so she didn’t give it another thought.  In a moment, she again sat and the wall showed a scene of a church pew where the same man and woman sat with the same but slightly older girl.  The choir was singing something but nothing was heard until the man beside her said, “Sure sweetheart, we can see about joining the choir next year.”  The woman smiled and in an instant, the scene changed.  The perspective now was from the choir’s view looking out into the congregation as the man, woman and now teenage daughter sang together while the choir behind them harmonized.  The song was as beautiful as you can imagine and seemed to go on forever.  That is until an abrupt and long drawn out “Amen” chorused through the door interrupting the song.  The wall again went blank and the woman tried to hurry out of the room but it was getting harder to leave these days.

“Welcome to Day Gone By, if you would please follow me.”  As they walked down the hall, the attendant said, “Back so soon?  Well no matter, your room is ready for you.”  In the room, the wall again showed a scene from the same pew but this time there sat the elderly man and woman from the kitchen.  The preacher was saying something but nothing could be heard.  The elderly man’s head slowly fell, caught itself, and bobbed back up.  A moment later, the same pattern was repeated.  After the third time, the woman nudged him with her elbow and he opened his eyes again.  A short time later the man’s head began to fall once again and then slowly bob back up, but before it could get fully back in place the woman’s elbow struck him once more.  The man flinched and looked over at her with sleepy brown eyes and a smile from ear to ear.  The scene paused on the man’s smiling face and remained there until, “in Jesus name, amen!” rang through the room from the outside.  The woman knew she was supposed to get up and leave but she didn’t want to.  She was very content just to stay there.  But she did slowly get up and with one final glimpse into the man’s face, she left the room.

This woman returned often to that room, more times than anyone could count.  What she saw in her room no one could say but her.  Sometimes she did tell others what she saw in that room, most of the time she never bothered but know that she went there very often and it in many ways became her home.  For it was there that she ended up spending much of her time and on many different occasions was the only place she really felt safe, secure, and happy.

“Welcome to Days Gone By, if you would please follow me.”  She did.  By now, she knew for a fact that the walk was further, though her room was always the same.  She didn’t know how this worked but her room was definitely further down the endless hallway to reach her room.  She knew she was deeper in the facility but she didn’t seem to notice that it took any longer to get there, which it didn’t because time has no meaning there.  She also now noticed more and more people around.  Not because there were actually more people than at the entrance of the facility or the beginning of the hallway but simply because she actually noticed them now.  She never used too but now she did.  Again she didn’t know why this was it just simply was that way.

“Do you think you will be staying overnight again?” asked the attendant.  “I don’t know,” said the woman.  “But it doesn’t really seem to matter since I am here whether I am tired or not it seems.”  In her room, she again sat and again the screen revealed scene after scene.  Until came a scene the woman dreaded to relive but she often did.  The elderly couple lay in bed together saying their prayers, the man spoke “And thank you, Father, for your goodness to us over these many years.  Thank you for our house, which you made a home.  Thank you for bringing and keeping us together.  Thank you for Your grace and for our Grace and for her Gracie.  In the name of our Blessed Hope, Jesus Christ, amen.”  The two rolled over and the scene went dark.  A moment later a lamp illuminated the room again, it was much later now.  “What’s wrong?” said the woman with slight frustration in her voice.  “I don’t know,” said the man.  “I just feel a little sick, that’s all.  I’ll be fine.  Don’t worry.”  The woman turned off the lamp and the scene again went dark.  The image returned this time with the sunrise just starting to infiltrate the room.  The woman got up and went about her regular morning routine.  When the toaster popped out the first slice of bread, the woman came again into the bedroom and said, “Dear, breakfast is ready”.  But the man didn’t move.  She went over to him and shook him but still nothing.

This scene played out further the woman trying frantically to wake the man with no success and weeping over him but the scene never advanced from there.  It played over and over again and as it played over and over again her words and the words of her husband looped, “What’s wrong?”  “I don’t know I just feel a little sick, that’s all.  I’ll be fine.  Don’t worry.”  Over and over again, this happened, more times than anyone could count.  And as this progressed the elderly woman sitting in her chair with tears running down her face said what she had said so many times before, “I should have done something”.  This time, however, with every loop of dialog and visual memory she too repeated her part for no one knows how long.  When suddenly there was a knock on the door to her room.  She knew that meant she was supposed to leave but she couldn’t the scene still played out before her on the wall and the midnight conversation still repeated.  She finally broke her gaze from the wall but as she turned toward the door, the wall around it picked up the scene from where the other had left off.  The woman made her way over to the door, which knocked again.  She struggled to get to the door but made it there to leave.  However, the door was locked.  No matter how hard she tried, the door would not open.  A voice then came from the other side, which said, “Grandma, it’s me, Gracie.  Are you okay?”  The elderly woman didn’t know what was happening but didn’t want to worry her.  So she stumbled out the word’s “Oh, yes sweetheart.  I am just a bit out of sorts today.”  The two of them went on to have a longer conversation about one thing and another, though the elderly woman could not remember what specifically for she was never able to leave that room nor turn off the scene, which continued to play.  Gracie soon said goodbye and all the woman could remember from their long conversation were her final parting words, “It was nice visiting with you, grandma.  I love you.”  But even then, the scene never stopped and the dialog never ceased.  Others came to her door to visit her.  Sometimes their presence outside was announced by a knock at other times by the ring of a phone call but no matter who it was the door still would not open.  That is until quiet snoring was heard from outside and only then did the door unlock and the woman was able to leave.