The Wandering Pulpit – The History of Mother’s Day 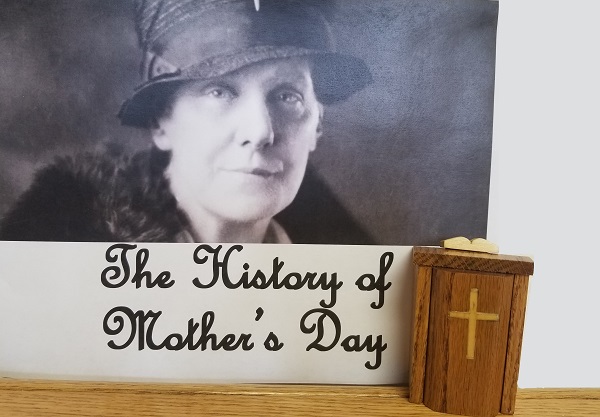 Mother’s Day is here again! But have you ever wondered where Mother’s Day came from and how it became an American Holiday? I have! So let me spare you the google search and share with you the roots of this day dedicated to Mothers everywhere.

The history of Mother’s Day as we know it in America can be traced back to a woman named Anna Jarvis. Anna was born on May 1st 1864, the ninth of eleven children born to Granville and Ann Reeves Jarvis in Webster, West Virginia. Out of these eleven children only Anna and three of her siblings lived past early childhood. Anna herself would never marry or bear any children of her own which made her bond with her mother closer than any of her siblings. The roots of Mother’s Day can be traced back to a prayer which Anna’s mother, prayed during one of her Sunday School lessons in 1876 at the Andrews Methodist Episcopal Church.

“I hope and pray that someone, sometime, will found a memorial mothers day commemorating her for the matchless service she renders to humanity in every field of life. She is entitled to it.”
Ann Reeves Jarvis

This inspired young Anna and from that day her mother’s prayer and desire for such a day would never escape her heart. Anna grew, and under the encouragement of her mother went off to Augusta Female Seminary in Staunton, Virginia, today known as Mary Baldwin University. After two years of studies and upon receiving her diploma she returned home to Grafton, where the family had been living for some time. Anna worked at the local school and was an active church member with her mother. Sometime later her uncle, Dr. James Edmund Reeves of Chattanooga, Tennessee convinced her to move there and take up a job as a bank teller. This was short lived however for about a year later Anna moved again this time to Philadelphia, Pennsylvania to live with her brother. All the while her mother encouraged her to move back to Grafton, which she never did. Though there were many miles between the two of them they stayed in continual correspondence with each other, maintaining the closest of relationships.

In 1902 Anna’s father, Granville, died. Anna encouraged her mother to move in with her in Philadelphia but it wasn’t until 1904 that she took Anna up on her offer, primarily because of her failing health. A year after moving in Anna’s mother died on May 9th 1905, just a little over a week after Anna’s birthday. After her mother’s death Anna began to campaign for a memorial day dedicated to all mother’s, specifically noting their love, sacrifices and influence. A few years later in 1908 at the Andrews Methodist Episcopal Church, where both Anna and her mother had been so actively involved, the first memorial ceremony to honor mothers was held. Anna herself did not attend but she sent a telegram which was read aloud before the congregation along with 500 white carnations for those in attendance. Anna did not attend this ceremony because at the same time she was holding another one she also organized at the Wanamaker’s Store Auditorium in Philadelphia where she is recorded as giving a moving speech to those gathered for the event. Anna’s movement grew as the years went by with many churches, towns and even states recognizing the holiday. Anna’s hard work finally payed off in 1914 when President Woodrow Wilson signed a measure making the second Sunday of May, the official national holiday we know as Mother’s Day. And this was all started by a woman who was never a mother herself but simply desired to honor her own mother as well and others like her.

Now isn’t that a nice story! However, and rather unfortunately, that is not the end. After Mother’s Day became a national holiday it quickly became extremely popular in the States. Leading to the opportunity for entrepreneurs to enter the scene and we all know that where there is money to be made there are always people who are there to exploit it. This commercializing of Mother Day’s infuriated Anna, who it is safe to say loathed these capitalistic florists, card makers and other traders who pedaled wares she thought taking away from the sentimentality and heart of Mother’s Day. She is recorded as saying,

“A printed card means nothing except that you are too lazy to write to the woman who has done more for you than anyone in the world. And candy! You take a box to Mother—and then eat most of it yourself. A pretty sentiment.”
Anna Jarvis

Anna intended the day to be a day actually spent with one’s own mother intimately and personally celebrating among the family and attending church services together. Anna spent the rest of her life battling against the forces of commercialism. So much so that spent much of her own personal wealth on legal fees in filing lawsuits against companies she claimed had perverted the true meaning of Mother’s Day. By 1943 she was so disgusted that she began an open petition to actually have Mother’s Day rescinded and no longer celebrated in the United States. In her mind Mother’s Day was no longer what it was meant to be and was better off being forgotten than commercialized. Her campaign continued until she was admitted to the Marshall Square Sanitarium in West Chester, Pennsylvania due to failing health. With depleted funds, from her campaigns to get rid of the holiday she helped to start, her bills were paid by people connected with the floral and greeting card industries so that she could continue to receive care at the sanitarium. Anna Jarvis died November 24th 1948, and was buried next to her mother, sister, and brother at West Laurel Hill Cemetery, near Philadelphia, in Bala Cynwyd (yes, this is an actual place and yes, this is how you spell it), Pennsylvania.

The history of Mother’s Day is full of love and heart but at the same time full of sadness and shallowness. This is true though of nearly every holiday, when we as human beings attempt to establish something as sacred but then twist it into something for selfish gain. I can’t say I agree with the actions and sentiment of Miss Anna Jarvis in trying to get rid of Mother’s Day all together but I can whole-heartedly agree that Mother’s Day should be so much more than just sending a card or flowers to mom. But this is ultimately something that has to come from our individual hearts rather than dictated by others.

I would encourage you to take some time this Mother’s Day to reflect upon the amazing qualities that make a godly mother. One of Anna Jarvis’s original and most beloved gifts/symbols of the day was a white carnation. Which she spoke thus of.

“Its whiteness is to symbolize the truth, purity and broad-charity of mother love; its fragrance, her memory, and her prayers. The carnation does not drop its petals, but hugs them to its heart as it dies, and so, too, mothers hug their children to their hearts, their mother love never dying. When I selected this flower, I was remembering my mother’s bed of white pinks.”
Anna Jarvis

The white carnation was to be a symbol of a mother’s love which is pure, sweet and undying. This is something worth remembering and celebrating, and something I hope all mothers diligently strive for with the Lord’s help. As we come upon Mother Day’ once again, or perhaps it is more appropriate to say that Mother’s Day comes upon us once again, take the time to remember and celebrate the mother and mother figures in your life and thank them for their sacrifices. Also take a wandering moment to consider what such love led Moses’s mother to do in Exodus 2:1-3. Take the time to consider all of the sacrifices and risks she made for her son as well as how and why she was able to do so. After you have done this read Hebrews 11:23 and notice the secret to being a godly mother.